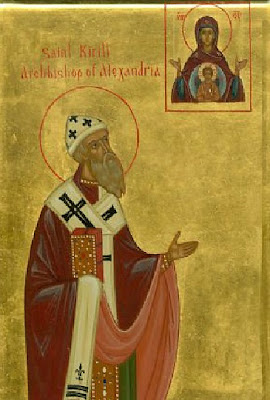 Saint Cyril was born in 370 and lived a monastic life. He was ordained a priest and succeeded his uncle as bishop of Alexandria in 412. He had a preeminent role at the ecumenical Council of Ephesus (431); he fought bravely against the doctrines of Nestorius, and wrote many learned works explaining and defending the Catholic and Orthodox Faith. St. Cyril, Patriarch and POPE of Alexandria, Egypt, presided over the 3rd great Ecumenical Council of the Church which met in 431 AD in Ephesus and which proclaimed Mary as the Theotokos ("God-bearer" or "Mother of God"). Cyril died in 444. This statement (Pist. 1: PG 77, 14-18, 27-30) strongly is defending the divine motherhood of the Blessed Virgin Mary, the Theotokos or GOD-Bearer.

That anyone could doubt the right of the holy Virgin to be called the Mother of God fills me with astonishment. Surely she must be the Mother of God if our Lord Jesus Christ is God, and she gave birth to Him! Our Lord's disciples may not have used those exact words, but they delivered to us the belief those words enshrine, and this has also been taught us by the holy fathers. 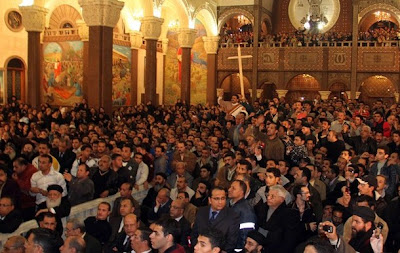 In the third book of his work on the holy and consubstantial Trinity, our father Athanasius, of glorious memory, several times refers to the holy Virgin as "Mother of God." I cannot resist quoting his own words: "As I have often told you, the distinctive mark of Holy Scripture is that it was written to make a twofold declaration concerning our Savior; namely, that He is and has always been God, and that for our sake in these latter days He took flesh from the Virgin Mary, Mother of God, and became man."

The divinely inspired Scriptures affirm that the Word of God was made flesh, that is to say, He was united to a human body endowed with a rational soul. He undertook to help the descendents of Abraham, fashioning a body for Himself from a woman and sharing our flesh and blood, to enable us to see in Him not only God, but also, by reason of this union, a man like ourselves. 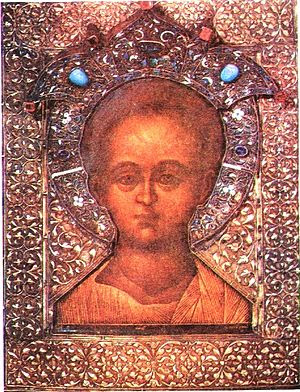 It is held, therefore, that there are in Emmanuel two entities, divinity and humanity. Yet our Lord Jesus Christ is nonetheless one, the one true Son, both God and man; not a deified man on the same footing as those who share the divine nature by grace, but true God who for our sake appeared in human form. We are assured of this by Saint Paul's declaration: When the fullness of time came, God sent His Son, born of a woman, born under the law, to redeem those who were under the law and to enable us to be adopted as sons.

...I see here a joyful company of Christian men met together in ready response to the call of Mary, the holy and ever-virgin Mother of God. The great grief that weighed upon me is changed into joy by your presence, venerable Fathers. Now the beautiful saying of David the psalmist: How good and pleasant it is for brothers to live together in unity (Psalm 133) has come true for us.

Therefore, holy and incomprehensible Trinity, we salute you at whose summons we have come together to this church of Mary, the Theotokos. 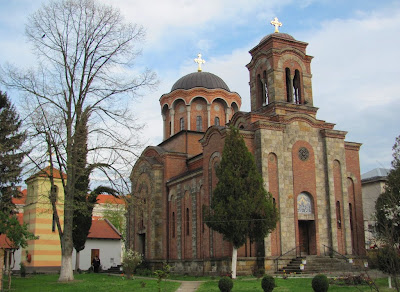 Mary, Theotokos, we salute you. Precious vessel, worthy of the whole world’s reverence, you are an ever-shining light, the crown of virginity, the symbol of Orthodoxy, an indestructible temple, the place that held Him whom no place can contain, mother and virgin. Because of you the holy gospels could say: Blessed is he who comes in the name of the Lord.

We salute you, for in your holy womb was confined him who is beyond all limitation. Because of you the Holy Trinity is glorified and adored; the Cross is called precious and is venerated throughout the world; the heavens exult; the angels and archangels make merry; demons are put to flight; the devil, that tempter, is thrust down from heaven; the fallen race of man is taken up on high; all creatures possessed by the madness of idolatry have attained knowledge of the truth; believers receive holy baptism; the oil of gladness is poured out; the Church is established throughout the world; pagans are brought to repentance.

What more is there to say? Because of you the light of the only-begotten Son of God has shone upon those who sat in darkness and in the shadow of death; prophets pronounced the word of God; the apostles preached salvation to the Gentiles; the dead are raised to life, and kings rule by the power of the Holy Trinity. 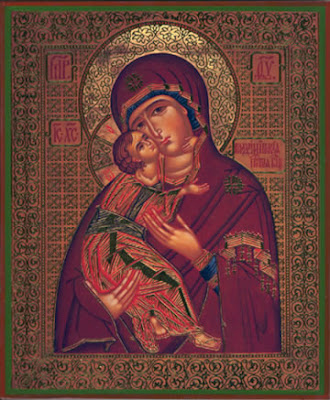 Who can put Mary’s high honor into words? She is both mother and virgin. I am overwhelmed by the wonder of this miracle. Of course no one could be prevented from living in the house he had built for himself, yet who would invite mockery by asking His own servant to become His mother?

Behold then the joy of the whole universe. Let the union of God and man in the Son of the Virgin Mary fill us with awe and adoration. Let us fear and worship the undivided Trinity as we sing the praise of the ever-virgin Mary, the holy temple of God, and of God Himself, her Son and spotless Bridegroom. To Him be glory for ever and ever. Amen.

St. Isaac the Syrian put it marvelously: "When you turn to God in prayer, be in your thoughts as an ant, as a serpent of the earth, like a worm, like a stuttering child. Do not speak to Him something philosophical or high-sounding, but approach Him with a child's attitude" (Homily 49). Those who have acquired genuine prayer experience an ineffable poverty of the spirit when they stand before the Lord, glorify and praise Him, confess to Him, or present to Him their entreaties. They feel as if they had turned to nothing, as if they did not exist. That is natural. For when he who is in prayer experiences the fullness of the divine presence, of Life Itself, of Life abundant and unfathomable, then his own life strikes him as a tiny drop in comparison to the boundless ocean. --St. Ignatius (Brianchaninov) 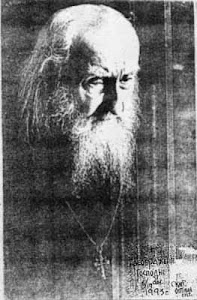 The contemporary spiritual, theological problem concerns the person [πρόσωπο]… Revelation reveals that “I am who I am” (Exodus 3:14). If He says, “I am” it means that He is a person. The word “I” has great significance. For it expresses the person. God says, “Let Us make man in Our image, according to Our likeness” (Genesis 1:26). Science cannot say this. Only revelation can say this. And we need to base ourselves on revelation, which the Lord never refuted…Theology is the content of our prayers. And an example of this theology is the Liturgy of St. Basil the Great. The whole anaphora is theology and is expressed through prayer. But then theology comes as a state of being. John the Theologian, from an academic point of view, was not a theologian, he says things simply. His theology, however, is a state of being. Whatever he says becomes dogma for everyone. But the only study that enables us to sense what God is like, is the ascetic life according to the commandments of the Gospel. When our life is lived according to the will of God, then we understand that there cannot be a difference between the commandments and the mind of God Himself. When we think according to the commandments, then our mind gets used to thinking as God Himself thinks. And regarding theosis, they say: but what is theosis? With obedience to the abbot from the beginning, one’s will is cut off, then in obedience to the Gospel commandments one reaches this state. We do small things but the results must become great. Through obedience we enter into the life of divine Being. We have good descriptions of this in the writings of St. Nicodemus the Athonite. I have told others, as well, that when they learn things from the world, they are living in sin. They need to free themselves through asceticism. This is how I tried to make them understand the need for patience. [Just as the Incarnation was a great kenotic act, where Christ God became man as one person and bore our sins patiently with humility and love. In following Him, we become true persons in Him and realize our life and fully live our freedom. It is here where personhood finds its greatest achievement: in putting on Christ and His indwelling in us by the Holy Spirit sent from God the Father. The very essence of our life must become constant personal encounter with Christ, and in this we become truly persons, truly free, truly loving. This is how personhood is understood in theosis. We fulfill our personhood in living in Christ and His dwelling within us, and inasmuch as He has perfected humanity, He raises us in freedom, in love, to the fulfillment of our humanity, as true persons in Him.] 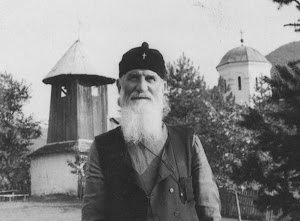 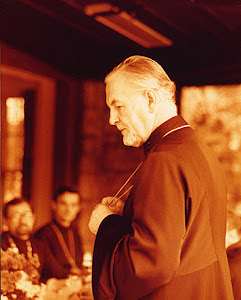 By and in the Eucharist, understood and lived as the Sacrament of the Church, as the act, which ever makes the Church to be what she is — the People of God, the Temple of the Holy Spirit, the Body of Christ, the gift and manifestation of the new life of the new age. It is here and only here, in the unique center of all Christian life and experience that theology can find again its fountain of youth, be regenerated as a living testimony to the living Church, her faith, love and hope. But just as the Church of the Old Covenant, the old Israel, existed as a passage to the New Covenant, was instituted in order to prepare the ways of the Lord, the Church as institution exists in order to reveal — in "this world" — the "world to come," the Kingdom of God, fulfilled and manifested in Christ. She is the passage of the "old" into the "new" — yet what is being redeemed, renewed and transfigured through her is not the "Church," but the old life itself, the old Adam and the whole of creation. And she is this "passage" precisely because as institution she is "bone of the bones and flesh of the flesh" of this world, because she stands for the whole creation, truly represents it, assumes all of its life and offers it — in Christ — to God. She is indeed instituted for the world and not as a separate "religious" institution existing for the specifically religious needs of men. She represents — "makes present" — the whole of mankind, because mankind and creation were called from the very beginning to be the Temple of the Holy Spirit and the receptacle of Divine life. The Church is thus the restoration by God and the acceptance by man of the original and eternal destiny of creation itself. She is the presence of the Divine Act, which restores and the obedience of men who accept this act. Yet it is only when she performs and fulfills this "passage," when, in other terms, she transcends herself as "institution" and "society" and becomes indeed the new life of the new creation, that she is the Body of Christ. As institution the Church is in this world the sacrament of the Body of Christ, of the Kingdom of God and the world to come. We can now return to the Eucharist, for it is indeed the very act of passage in which the Church fulfills herself as a new creation and, therefore, the Sacrament of the Church. In the Eucharist, the Church transcends the dimensions of "institution" and becomes the Body of Christ. It is the "eschaton" of the Church, her manifestation as the world to come.

Finding The Way To The Heart

Mind in the Heart

Glory to God for All Things

lessons from a monastery

This Is Life!: Revolutions Around the Cruciform Axis

Salt of the Earth